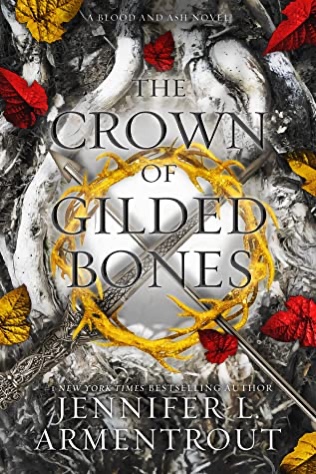 It’s been a while since I read this book thanks to my month of meh (I may just refer to it as that from now on), so I guess better late than never?? This book though became a highlight during that period of time, where I struggled to get myself not only to blog, but read. It was perplexing knowing I wanted and should read, but just not having the energy or motivation to do so. To put it mildly, this book got me some happiness/success that I really needed at the time, and I am beyond grateful.

The Crown of Gilded Bones by Jennifer L Armentrout is the third book in the Blood and Ash Series. A Romance Fantasy, we follow Poppy and Casteel as she discovers more of her ancestry and powers. Thrown into the middle of a long looming war, Poppy will have to embrace a role she and Casteel have always hoped to avoid, and save not only one land, but two.

Overall Rating: 4 out of 5 Stars

I love when continuing a series feels like an easy return; you don’t need a recap on what happened, you just simply fall back into the series and continue on your merry way. It hasn’t been all too long since I read books one and two, but I still appreciate how easy it was to get back into the series with this installment, especially given my reading slump at the time. I literally picked up this book, began reading, and instantly just got sucked back into the story.

The part of this series that is the easy catch for me is that it’s romance based. I love Fantasy, and the worlds, but the relationships from the romance part is what helps drive a lot of the action and adventure we see in this series, and I am there for it. Poppy and Casteel are each other’s biggest supporter in everything they do and endure. I think the only time I question it is when it comes to the male lead propping up the female lead. For some reason that is a common thing in these stories, but in this series it is a little more balanced out unlike with Rhys in A Court of Wings and Ruin. The other big love of mine when it comes to this series, and this book is the growing world and the ever evolving information we get with each book. Poppy and her lack of knowledge make the perfect platform for the reader to be slowly, but efficiently introduced to the world, the lore, and culture without being overwhelmed. On top of that, I just love the slow unfurling of Poppy’s past and ancestry. Every book so far has revealed a little more, and created plot twists that had me coming up with an ever evolving scenario of what really happened to bring Poppy into being.

The one thing that consistently makes me pause with this series is Poppy’s increasing power with each book. From Blood and Ash was probably the one that felt like it had her on a reasonable level with an urgency to learn more and grow more so she could survive the horrors of that life. Books two and three though have felt a little bit like a Naruto power up at times. If you aren’t familiar with anime/manga, Naruto goes through different arcs across the series, and in each one he typically learns a new jutsu, or improves an existing one, so essentially he is just a never filling glass of power, and at one point just OP (over powered). Poppy at this point feels like she’s on another level when it comes to all the characters around her, and while the enemies remain just as powerful, it’s definitely off-putting when you realize all the people who have trained or lived with the powers compared to her are now lower on the power scale. Just a strange scenario in the books for me, and something I wanted to touch on, even given how much I really do enjoy this series. What did you think so far of the Blood and Ash Series? Let me know in the comments below!