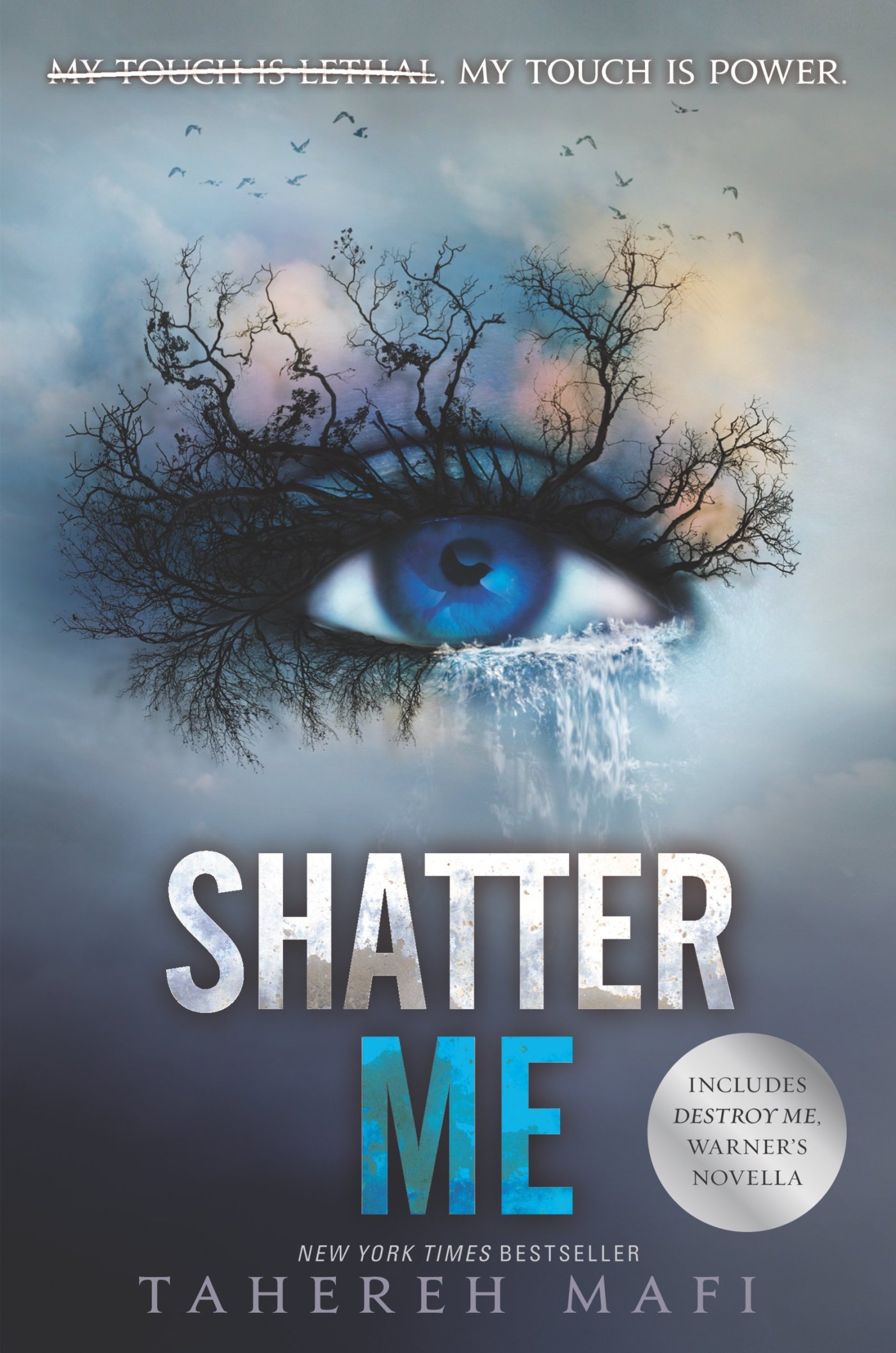 There are a lot of really popular books out there, and a decent list from there that I have yet to read, and know I probably should. Shatter Me by Tahereh Mafi has been one of those books I’d heard about for the longest time, and questioned if I should or shouldn’t pick up the books. Finally I saw several of the books at a used bookstore, and just went ahead and grabbed all of the books currently published. A bit of a risky move knowing me, but sometimes you just need an all or nothing situation. So, here we go, I read five books of a series in one month, and we are all wondering what I thought. Before we get going I do want to say that this is my opinion, so please don’t get mad at any statements made in this review. I just know with reviewing a popular series, I might really be stepping into it, but too late now I guess. On a last note, this is a series review, so there are likely spoilers ahead.

For those who haven’t heard about the Shatter Me series, it’s about Juliette, who has for the longest time lived in a psych ward of sorts as a new regime has taken over the United States. In this asylum she has not interacted with another human being for years, and the only activities she has are writing in her journal, and the trek to the shower, which is a danger in itself. Everything changes though when her jailers put a new prisoner in the cell with her, and it’s someone she knew a long time ago.

Overall Series Rating: 3 out of 5 stars

I’m going to break this down book by book a little, but overall this was a pretty easy series to binge once I got past book one. I think a lot of that had to do with one character in particular, but I was entertained at the very least. I think my biggest problem developed with books 4-5, which felt like more of an extension of the first three than a cohesive continuation of the plot, like it had been an afterthought instead of planned from the beginning. It sounds like I’m whining but this is becoming one of my new book pet peeves as it happens more and more. I’ll go more into this later in the reviews.

This was a book to get used to, between the severe lack of commas, basic tropes, and strange villains that all fit under the basic YA grouping. I think if it hadn’t been for me already having all the other books in the series I may not have continued from this one. The commas were an easily explained part since it could have to do with it being written by Juliette who hasn’t had a lot of schooling. From that point on though, its a mix of an entertaining book, and so many issues. That isn’t to say I didn’t enjoy it, I really did inhale this series, but there were some problems throughout, and unfortunately besides beginning in this book they followed me through the series.

While you are led and do feel genuinely bad for Juliette’s plight, the whole idea of teenagers that could or do save the world isn’t necessarily new, or technically logical (though I often overlook that fact for a good story). Coupled with her attachment to Adam in this novel, I was pretty annoyed with the plot movement. She essentially is brought into this military group to be their torturer because of her powers, but then parades around like a show pony and dressed up by its leader, who just may be one of the strangest “villains” in a ya novel. To escape she follows Adam pretty easily, no fight or question of his motive, or background. Yes, she’s been cut off from the world for a while, but instead of being trusting, I’d be more likely to fight and scream at everything. This one was just a strange and comma maddening experience for me, it really might just come down to the commas in the end, for all the frustration it got out of me. I was seriously tempted to start filling in the spaces where the commas should be!!

Book two, Unravel Me, was one of my favorites in the series as Juliette seems to grow by leaps and bounds, no longer playing to all of Adam’s whims. There are still some frustrating moments, don’t get me wrong, but it feels like we are finally getting somewhere with this book’s plot, and then going into Ignite Me. She becomes more of a force unto herself, and forms more opinions of the world around her without relying on others for everything.

One of the saving bits at this point in the series was Warner for me, in book one he made either just a terrible “villain” or simply a strange one. That could have been Mafi’s goal given his development arc, but for a beginning novel, he wasn’t a compelling bad guy, yes he was still pretty bad and came off sadistic, but he doesn’t come off as scary or likely to kill Juliette. Between Unravel Me and Ignite Me, he slowly became one of the reasons I was still reading, the relationship he has with Juliette hooked me, and it was all Warner. He’s the emotional development character and it shows. While everyone else remains the same throughout with new powers, or tiny developments, Warner is struggling with how to be better. You just have to look past book one, and try to pretend it and his actions then, never happened.

I’m constantly laughing at the weird, judgy notes I wrote during the reading of this series, and the funniest was me saying that we are finally leaving melodrama Ville with book 3. It was finally less about the Adam drama and more about the saving the world bit, which was what I was looking forward to. Most of the notes were just trying to keep track of my thoughts as I blitzed this series, but I think this was the strangest analogy I’d used to describe how I was feeling. This book though was like an ending in itself for the series, giving us a decent resolution, and the characters seeming to be pretty happy and well off in the end. But, oh was that not enough apparently. Brace thyselves for books 4 and 5 which decided to unseat every resolution we got, and not in the yay more action way.

Books 4 and 5, or rather the ones that dragged the series onward, and I do mean dragged.  Maybe it’s just me, but Ignite Me felt like an ending, and then bam the story somehow continues, and people show up alive that were thought to be dead or non-existent originally. It was like watching a magician pull bunnies out of a hat for me, and I just couldn’t put two and two together. It sounds like a rant coming on, but I was honestly confused. To be fair, this isn’t the first trilogy to be extended to a saga (Red Rising did it to me too), but it also felt a lot more forced. The events are interesting, and there’s still character development, but it just felt like the author or publisher decided to slap on some more books after the fact instead of working it into the overall plot. I wanted to end on a good note, and I did, but it was lacking when it came to having that cohesive plot. The big pulls in the plot of these books come out of a left field, and had no foreshadowing, no subtle hints at the existence of big characters, and uses the old, but we thought they were dead trick to explain away some of it. I probably should have just ended on Ignite Me.

In the end, I actually did enjoy this series, otherwise there’s no way I could read it all in the span of two weeks, but there were some definite flaws. I went into this knowing it was an extremely hyped book, but wanted to see if I would like it. I guess this one just wasn’t for me (gives small shrug). I’m hoping this doesn’t write off all of Mafi’s books since I’ve heard a lot of good things about her other works, but it might take a bit for me to get there. Hopefully I can enjoy her work eventually, for now I’ll keep on with my Fantasy pile. What were your thoughts on the Shatter Me Series? What was the last hyped book you read, and did you feel it was overhyped or justified? Let me know in the comments below!

3 thoughts on “The Shatter Me Series by Tahereh Mafi {Series Review, Books 1-5}”